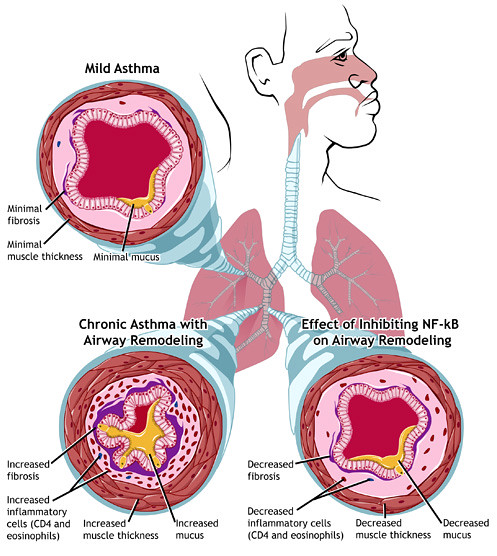 What is Eosinophilic asthma?

Eosinophilic asthma (EA) is characterized by severe, chronic disease. Approximately 10% of all cases of asthma are defined as severe, and nearly half of those with severe asthma have signs of EA. The disease typically has an onset in adulthood, with diagnosis peaking in adults aged 35-50. While most asthma results from allergy or occurs with other allergic type conditions (e.g., hay fever, food allergy, eczema, or other allergic conditions), this does not appear to be the case with EA. Symptoms of EA not only include the typical asthma symptoms of shortness of breath, wheezing and coughing, but also chronic sinus infections and nasal polyps.

How is Eosinophilic asthma diagnosed?

What are the latest treatments for Eosinophilic asthma?

Treatment of EA includes the standard asthma therapies, such as bronchodilators and corticosteroid treatment. Approximately 10-20% of those who are treated with these standard therapeutics continue to have poorly controlled asthma. [Walford 2014] There is emerging evidence that treatment regimens may have varying efficacy based on demographic characteristics, and that these varying responses may have a genetic component. [Levin 2019] A recent clinical study found that African American treated with inhaled corticosteroids have greater eosinophilic airway inflammation as compared to other asthma patients treated with inhaled corticosteroids. This marker of chronic inflammation and disease severity may help explain the greater asthma burden among African Americans. [Nyenhuis 2017] In the treatment of EA, biologics that can be used in combination with standard therapies in refractory disease have been developed. In EA, inflammation mediators, such as interleukin-5, have been targeted by newer therapeutics, as IL-5 plays a key role in the differentiation, survival, migration, and activation of eosinophils. In recent years, two monoclonal antibodies (mepolizumab and reslizumab) which target IL-5 and one that targets a subunit of the IL-5 receptor (benralizumab) have been developed and approved for the treatment of EA.

You May Also Like::  Post-COVID Conditions Are Common Among Adult Survivors

What is the risk level for Eosinophilic asthma?

Asthma is a burdensome disease and is associated with higher healthcare costs, decreased quality of life and higher mortality rates. This is particularly true for those with severe asthma and racial minorities. [Hossny 2017; Moorman 2007] African Americans have been found to be more likely to have uncontrolled asthma and reduced lung function as compared to Caucasian patients [Nyenhuis 2017], as well as being more likely to experience asthma-related hospitalizations, emergency department visits and mortality. [Moorman 2007] African Americans not only have a higher prevalence of asthma, but have higher rates of morbidity and mortality, with nearly 2 to 3 times the mortality rates as compared with Caucasians. [Akinbami 2006] Even after controlling for factors such as environmental exposure, disease severity and access to healthcare, African Americans with asthma have still been found to have higher rates of morbidity and mortality. [Ford 2006] It is thought that these signs of severe, refractory disease among African Americans with asthma may in part be linked to increased levels of eosinophilic airway inflammation.

You May Also Like::  Researchers Hone In On Anti-Interleukin-5 Antibody Responses