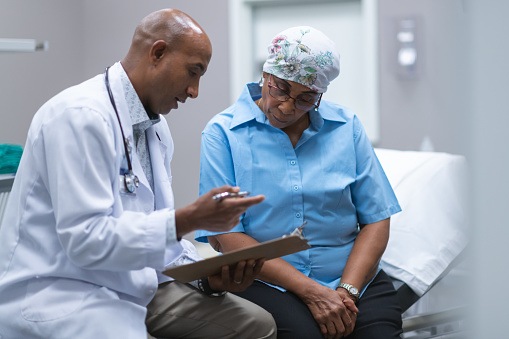 In this MD Newsline exclusive interview with oncologist Dr. Shaina Rozell, we discuss cancer survival and cancer mortality among Black Americans. We also discuss how a patient’s health literacy impacts their cancer management.

Why do Black Americans have the highest mortality rate and shortest survival of any racial/ethnic group in the United States for most cancers?

“I think that is a very difficult question and one that is tied to our history. I think the main reason is our socioeconomic status. Lower education and income levels are the main reasons why we have higher rates of cancer deaths in our communities of color. When you think about our income, most African Americans invest it towards taking care of our families and children. We don’t have time to go to the doctor.

Another reason is we don’t have the income to seek care. We don’t have insurance. This lack of income and insurance really creates a barrier in accessing care. Number two, consider where we live. Historically, there are lots of data that show that our communities experience higher rates of asbestos and lead, which contribute to increases in cancer.

And so, these are things that we, as African Americans, can’t necessarily change. These are some of the main social factors that create these higher rates of cancer incidences and cancer deaths.

Another major reason is a lack of trust, historically, in the healthcare system. For example, the Tuskegee experiment and other incidents have caused African Americans to deeply distrust healthcare professionals. And so, when we don’t have providers that look like us, of course, there are questions like, ‘oh, are they doing this [just] to make money? Are they trying to do another Tuskegee experiment?’

About a third of African American women report that they have experienced some sort of racial discrimination with their healthcare providers. So I think there are a lot of things that we can do better to try to mitigate these issues that we’re facing.”

How does a patient’s health literacy impact their cancer management?

“It is a struggle when there is no knowledge about healthcare. Number one, if there’s no knowledge, there’s no seeking knowledge. Ok? And this point also is a major part of seeking healthcare and getting diagnosed at an earlier stage.

If you don’t think there’s an issue, or you think that, ‘oh, maybe this mass in my breast is just a lump that’s supposed to be there. It changes with my menstrual periods. It’s not cancer.’ You may wait three or four months to visit a doctor because you think that lump is normal. I think that’s a major problem.

Number two, it’s a hard issue to explain cancer and what it is to patients when they don’t have the education level required to understand. So, when you’re sitting in the office and trying to explain things, and the patient has maybe a third-grade reading level, that’s a struggle. You know? So educating your patients about cancer in layman’s terms, making sure that the patient and their family comprehend what’s going on is important. And I think we have a long way to go.

I had a patient who shared with me that many t.v. shows, ones that are probably more prevalent in African American communities, are starting to highlight different major life issues [including health issues]. I think maybe this media is helping to influence patients to seek healthcare.

For instance, in an episode of The Chi, an African American woman and her partner were engaging in intimacy when he felt her breast and found a lump and said, ‘well, how long has this been there?’ And she said, ‘oh, this has been there for a long time. It’s nothing.’ But he said, ‘I want you to get it checked out.’ And it set the stage for her to get a mammogram and the doctor informing her that she had cancer.

I hadn’t seen something in a while that depicted what it’s like to be an African American woman where your partner supports you in seeking healthcare. And so people were having major dialogues on social media saying, ‘oh, I remember having a similar experience. I remember that fear of actually going to get a mammogram.’ And I said, ‘oh, that’s interesting.’

Maybe there are ways that media can promote some awareness and get minorities to seek care by making our communities more vigilant about our health.”