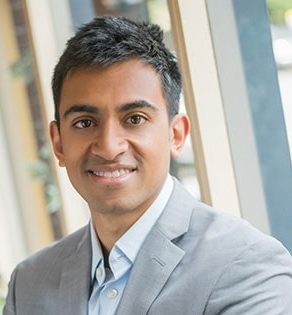 By Dr. Lauren WeinandJuly 1, 2021No Comments

In this MD Newsline exclusive interview with vitreoretinal specialist Dr. Murtaza Adam, we discuss what wet age-related macular degeneration is and why it matters.

Can you explain why age-related macular degeneration (AMD) in general, and wet AMD in particular, are such important health issues?

“Age-related macular degeneration (AMD) is the fourth most common cause of permanent vision loss and legal blindness worldwide. In 2020, there were roughly 200 million patients with AMD, and that number, due to our aging population, is expected to increase to 300 million over the next 20 years. So, we have a very large population of patients worldwide that are burdened by a disease that can really disable them.

So AMD has two phenotypes: dry or nonexudative age-related macular degeneration and wet or exudative age-related macular degeneration. In dry AMD, the retinal pigment epithelium, the cells that are underneath the photoreceptors of the macula—the center part of the retina that processes our central vision—those cells become engorged with deposits of protein and fat. That process can lead to atrophy of the retinal pigment epithelial cells and ultimately loss of vision.

Wet AMD, the other form of AMD, develops in about 15% of patients with AMD. In wet AMD, aberrant blood vessels, known as choroidal neovascular membranes, arise from the choroid—the layer of blood vessels underneath the macula. And these membranes are not normal.

You May Also Like::  MicroRNA Possible Biomarker For Early AMD Detection

They grow spontaneously like tumorous growths, and they leak and bleed underneath and within the retina. And that process can cause rapid and sometimes permanent damage to the photoreceptors, the ganglion cells, and the connective tissue cells within the macular architecture—and can lead to severe and rapid vision loss without treatment.”

Is AMD commonly misdiagnosed? What is it mistaken for?

“During the pandemic, we had more time to spend on education for the general eye community. So one of the lectures that we did was “The Many Masqueraders of AMD.” There are many diseases that can mimic AMD. Some are genetic, like familial drusen, a condition where younger people under the age of 50 develop those deposits of fat and protein underneath the macula, but they typically are not associated with vision loss at a young age or even at a later age.

And then there are diseases that are variants of AMD. So there’s a variant of wet macular degeneration, most commonly found in Japan, called polypoidal vasculopathy. Those patients develop blood vessel growth from polyps underneath the retina within the choroid, which can look a lot like wet AMD. But, the patients with this disease tend to be patients from East Asia and Africa rather than the classic Caucasian or Chinese patients for wet AMD.

There are many conditions that look like wet AMD. The proper diagnosis is comprised of a few criteria. Number one, the patient has to be over the age of 50. Number two, we look for confirmatory findings on optical coherence tomography (OCT), in which we can visualize a cross-section of the retinal architecture at a level of about 3 microns, and we look for hallmark signs of vascular change and anatomic change in the macula that is characteristic of the disease.

You May Also Like::  Dr. Rishi Singh: Wet AMD and Vision Loss

And finally, a confirmatory test that we use is fluorescein angiography or the less invasive OCT angiography. These methods detect neovascular membranes under the retina.

So, there are many conditions that mimic wet AMD, but we have a number of tests we can perform right here in the office to confirm the diagnosis.”

“If you look at the clinical trial data, it’s highly variable where patients with wet AMD present in terms of their central vision loss. So, for example, today, I saw a patient who is asymptomatic in her good eye with wet AMD, whereas her other eye doesn’t see as well due to active wet AMD. So there are patients like her who we catch early, we treat, and they can maintain good vision for most of their lives.

Other patients develop massive exudation or hemorrhaging underneath the retina, and that can lead to severe and sometimes even permanent vision loss even with treatment. Most patients are somewhere in between. So they’ll notice a waviness in their vision, such as when they look at the edge of a door, and they’ll see it waving a little bit.

Or they might notice that they have a scotoma, a small blind spot in their vision. And in those cases, they might be reading something, and they notice one of the letters in the words is missing. That’s the typical way people with wet AMD present, but there is a large spectrum of presentations.”