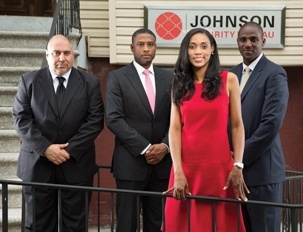 HOW TO PREPARE YOUR BUSINESS FOR SUCCESSION

When their father died in 2008, Jessica and Charles Johnson Jr. were left with the question of whether to make payroll or close the doors of their family-owned business. The security firm had been started by their grandparents nearly five decades ago in the Bronx, New York. “We could have disbanded the company and sold the assets, says Charles Jr., who is a shareholder at Johnson Security Bureau Inc. “We would have been OK. However, we knew that many families were depending on us for employment, so we chose to keep it going.

Their grandfather and Johnson Security founder, Wilbert, died abruptly without leaving a succession plan in place for his son Charles Sr. or widow, Dorothy, who ran the company until she retired in 2000. And, although Charles Sr. taught his children how to schedule employees and handle payroll, they too were left without a concrete plan on how to move the company forward after his health declined within three months of his cancer diagnosis.

“Our father left us clues, similar to a scavenger hunt map, on how to run the business. We had an abundance of paperwork that we had to dig through to find the answers we needed, says Jessica. “We spent a lot of time on the Internet and calling various agencies to understand some of the nuances of the business operations. I would have preferred it if he had left more detailed instructions, an ‘owner’s manual’ if you will, or a GPS to run the business. That would have made things much easier. Jessica, 38, left her pharmaceutical sales position to run the company full time along with her brother, Charles Jr., 37, in January of 2009. She now serves as president and majority owner.

Losing their father made the siblings realize how important it is to have a plan in place, even though neither of them has children. “You know what they say, the first generation builds it, the second generation grows it, and the third generation loses it. We’re trying to avoid being that generation that loses our family business, says Jessica.

Indeed, reports show that only about 13% of family businesses survive the third generation. Most experts attribute this low survival rate to the failure of putting in place a strategic succession plan. Leadership transition is a pivotal point in the life of a company that can sometimes make or break it. As the founder, you may plan to exit the business at retirement, but what happens if the business needs to be transferred sooner because of illness, disability, or death? What if one of those circumstances occurs and business equity is insufficient to fund your retirement or provide for your needs? These are questions entrepreneurs need to ask if they want to keep their businesses alive.

You May Also Like::  Former NBA player Christopher Gandy talks about AI algorithms

The Johnsons, graduates of Goldman Sachs’ 10,000 Small Businesses program, are fortunate. Not only has the firm survived, it generated nearly $2 million in revenues for 2012. “Our goal is to hit $3 million in 2013 and to reach $5 million within three years. To meet those targets, we’re thinking about expanding into training and consulting.

As with the Johnson family, entrepreneurs in the early stages of business generally focus their energies on building capital, growing their business, and just surviving, so it’s not uncommon for succession planning to be an afterthought. Even if the founder has done a great job of growing the company and making sure it thrives, measures need to be put in place to ensure that the company survives and business flourishes long after the founder is gone. Chris Gandy, vice president of sales for Water Tower Financial Partners, a MassMutual general agency in Chicago, offers the following five tips to ensure a smooth leadership succession.

1. Begin With the End in Mind
“You need to start with an exit strategy, says Gandy. “Most businesses have no succession plan because they go into it not knowing if the business was ever going to go anywhere, so once they’re in the middle of it there’s no way to get out. Gandy suggests that before you start with a valuation of the business, set goals, and discuss revenues, you should talk about the continuation of the business. How are you going to grow it, build it, multiply it? Are you going to sell it, liquidate it, or keep it in the family?

The lack of succession planning in the previous generation spurred the Johnson siblings to take action. “We decided to document the company’s operations, Charles Jr. says, “rather than rely on oral knowledge. Jessica and I get together periodically to discuss specific topics, such as payroll and taxes. We record these conversations so the information is available. In case someone else takes over the company, these records will provide a guide on how to run it.

2. Build Your Team
There are a series of people that need to be involved in the process, says Gandy. “You need an accountant, financial planner, a banker, and definitely an attorney to make sure that the structure of the business is designed correctly to meet your goals. Many people get into business with the idea that I’m going to grow the business and then I’m going to decide what kind of entity we’re going to be. You should be asking yourself, ‘How are you designed from a tax structure? Use your network to identify professionals to add to your team. “Referral is the best way to build your database of professionals. Go to other businesses like yours and find out who they’re working with. Your Chambers of Commerce is also a useful resource in finding key players.

You May Also Like::  The 10 money mistakes doctors keep making (and how to avoid them)

Jessica credits her team of advisers, which includes two attorneys and an accountant, with helping to transfer the company’s shares to herself and her brother. “There were state regulations involved and certain licenses to maintain, she says. “It took a while, and there was some trial and error, but we are now the ones who own and manage Johnson Security Bureau.

3. Assess Family and Internal Candidates
Find someone who has an interest in the business, advises Gandy. “I recommend you set up a family meeting and find out who those people are. The worst thing you can do is to try to have a succession plan with someone who doesn’t want to be in the business. In that meeting, find out what those family members want for the business. What does it mean for the family? What kind of legacy do they want for this business Gandy also recommends  setting up a board-appointed search committee that could include staff representation, an accountant, and an attorney. “Just because you’re family doesn’t mean that you can take shortcuts. You want to make sure that you have all the right people in place and that it’s legal and binding, he adds.

To identify a key person who is not family, Gandy suggests that you look for leaders within the organization. These are people who play multiple roles and have a vision for where they want the business to go once you’re gone.

While keeping their eye on a possible future generation, the Johnsons have started discussions with their team of advisers about a succession plan for right now. One of the advisers on the team, Andrew Karlen of the law firm Karlen & Stolzar in White Plains, New York, says that a family business with co-owners generally should have a buy-sell agreement in place. “A buy-sell agreement specifies events, called ‘trigger events,’ such as death, disability, bankruptcy, or divorce, which will require or allow the sale of the affected owner’s interest to the other owner or the company, he says.

But they are also keeping their eyes open to outside ownership in the event that neither of them ever has children. “At this time, we are trying to identify the skill sets we would like the next executives to have, says Jessica. “Ideally, we would like a family member or internal candidate to take over the reins. Nonetheless, we realize that as the security industry evolves, an outside candidate may be more appropriate. Our advisers and colleagues are helping us understand the intricacies of preparing for a major management or even ownership shift. We want to find someone who is committed to the legacy and values of Dorothy and Wilbert Johnson.

You May Also Like::  AI ALGORITHMS MAKE FAST BREAK INTO INSURANCE

4. Protect Your Assets
Besides a fair valuation, a buy-sell agreement should have some means of funding the purchase from the former owner. Often, life insurance is used to cover the possibility of an owner’s death. “We have been looking into key-person insurance, Jessica says. Similarly, disability insurance might fund a buyout if one of the owners is unable to keep working for the company. In case an owner retires or just leaves for greener pastures, the purchase might be made over time, from future company revenues. To cover such a contingency, it’s important that the departing owner is confident that the company will remain in good hands, generating enough cash flow to eventually close the deal.

5. Develop an Exit Strategy
Succession planning doesn’t end with an estate plan and life insurance. It includes transferring the trust, respect, and goodwill that has built up over the years.

Thomas Wacht of White Plains, Johnson Security’s other attorney, notes that a buy-sell agreement should have some provision for an accurate valuation of the business interest that will be bought or sold. “An opinion from a qualified expert can cost thousands of dollars he says, “but that could be worthwhile. Karlen adds, “Most business owners don’t know what their business is worth today let alone what it will be worth at some unspecified future time. There are numerous methods of addressing valuation, including requiring that, at the time of the required or permitted buyout, the value be determined by applying a specified formula (for example, a multiple of earnings), or obtaining an appraisal if the parties cannot agree upon the price.

“With a reasonable valuation, both sides can be treated fairly and tax problems may be avoided, says Wacht. The Internal Revenue Service tends to look hard at family business buy-sells, alert for valuations designed to reduce taxes.

The Johnsons have discussed a buy-sell agreement. “We recently met to talk through the specifics of our proposed agreement, Jessica says. “The next step is for us to review our goals and the information we discussed with our attorneys and our accounting team. Ideally, the buy-sell agreement will be finished soon.