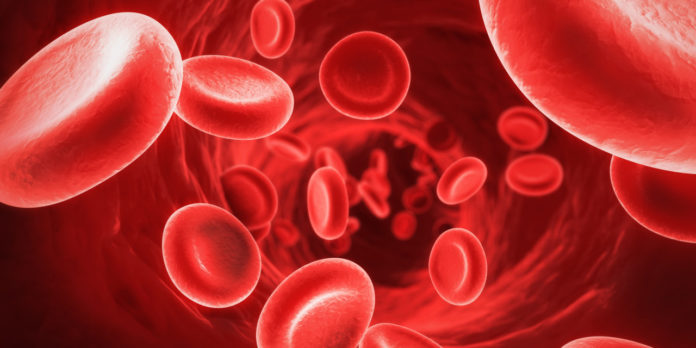 Iron is necessary in the process of erythropoiesis as the production of hemoglobin requires iron stores. Initially the body is able to continue producing normal red blood cells despite inadequate iron stores. However without restoration of iron stores, hypochromic microcytic red blood cells are produced. In developing countries, the most common cause of iron deficiency anemia is poor dietary intake and intestinal infections such as hook worm. In developed countries, the most common causes of iron deficiency anemia are chronic blood loss such as heavy menstrual bleeding or vegetarian diet. Postmenopausal women or men with iron deficiency anemia should be ruled out for malignancy, especially of the gastrointestinal tract.

Signs and symptoms of iron deficiency anemia are secondary to the decrease in red blood cells resulting in decreased oxygen delivery. Symptoms are gradually progressive from asymptomatic to an increase in fatigue and weakness. In children, iron deficiency anemia can result in difficulty concentrating, difficulty in school, and behavioral changes. In acute blood loss, there is a decrease in intravascular volume resulting in hypotension. This triggers activation of sympathetic nervous system resulting in tachycardia. The decrease in oxygen carrying capacity also results in tachypnea. On physical exam, the presence of pallor of the skin and mucus membranes may be present depending on the severity of the anemia. Additionally, a smooth tongue on exam or decreased papillae may be present. Patients may also experience cheilosis, koilonychia or spooning of the nails.

Diagnosis of iron deficiency anemia is made with laboratory testing. A low ferritin is the most specific test as it evaluates iron stores. A complete blood count (CBC) will show decreased red blood cells (RBCs), hemoglobin, and hematocrit and microcytic hypochromic cells on peripheral smear. Reticulocyte level will be low due to decreased iron levels and the inability of the bone marrow to produce RBCs. Transferrin saturation is also low.

Treatment of iron deficiency anemia includes treating the cause of the anemia as well as iron supplementation. Oral iron in the form of ferrous sulfate, ferrous gluconate, or ferrous fumarate is used frequently. However, approximately 70% of patients do not tolerate oral therapy due to gastrointestinal side effects. Oral iron should be taken on an empty stomach as gastric acid is needed to aid in absorption. Treatment is a slow process and it may be 3-6 months before iron stores are restored with oral therapy. In patients unable to tolerate oral replacement, IV iron is available. Additionally, patients with malabsorption and lack of improvement in iron levels with oral therapy should be treated with IV iron.