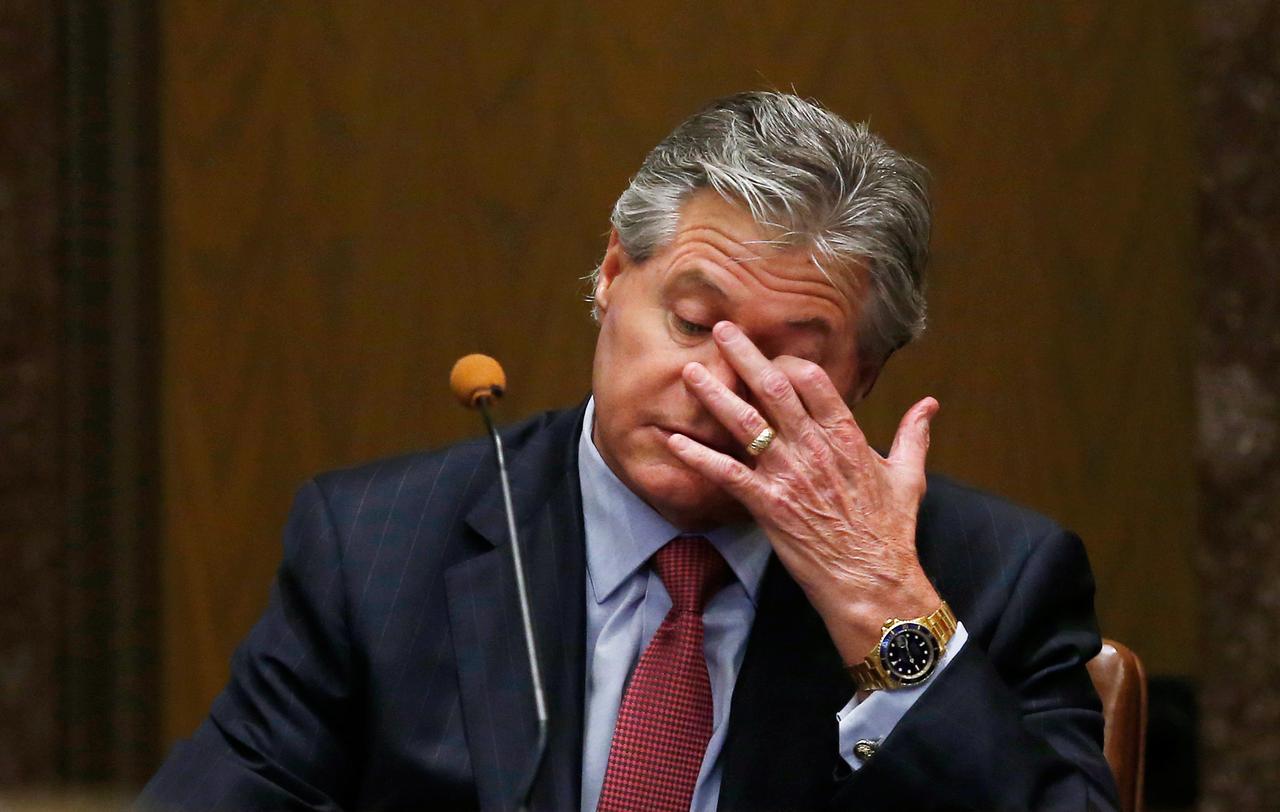 (Reuters) – The father of a college football player who died of a drug overdose gave emotional testimony about the U.S. opioid epidemic’s personal cost on Wednesday in the second day of trial of a lawsuit by the state of Oklahoma accusing Johnson & Johnson of fueling the crisis.

Craig Box, whose son Austin Box died of an opioid overdose, pauses during testimony during the second day of a trial of Johnson & Johnson over claims they engaged in deceptive marketing that contributed to the national opioid epidemic in Norman, Oklahoma, U.S. May 29, 2019. Sue Ogrocki/Pool via REUTERS

The testimony in a state court in Norman, Oklahoma, came during the first trial to result from around 2,000 lawsuits by state and local governments against opioid manufacturers.

Those cases seek to hold the companies responsible for an epidemic the U.S. Centers for Disease Control and Prevention says led to a record 47,600 opioid-related overdose deaths in 2017.

Holding back tears, Craig Box said he never suspected his son Austin, a 22-year-old University of Oklahoma linebacker, was abusing painkillers until after the young man was found unconscious at a friend’s house in 2011 and died at a hospital.

“We had no idea about the prevalence of these drugs and the dangers of these drugs,” Box said during testimony streamed online by Courtroom View Network.

Box, who said he did not know what painkillers his son took, was called as a witness to support Oklahoma Attorney General Mike Hunter’s assertion that J&J helped cause the epidemic by marketing opioids as safe and effective for everyday pain while downplaying their addictive qualities.

You May Also Like::  Hahn Resigns as Head of FDA, Dr. Janet Woodcock New Interim Chief

The state in the nonjury trial before Judge Thad Balkman has argued J&J’s actions created an oversupply of painkillers and a public nuisance that will cost $17.5 billion to remedy over 30 years.

J&J denies wrongdoing, arguing it properly marketed opioids and that the state cannot prove it caused the epidemic. Its stock price closed 4.2% lower at $131.33 on Wednesday.

To support their claims, the state’s lawyers played a videotaped deposition from Dr. Russell Portenoy, a physician who spent years advocating the use of opioids for chronic pain while acting as a paid speaker and consultant for drugmakers like J&J.

Portenoy, who agreed to testify for Oklahoma to avoid being sued himself, said he was troubled by how drugmakers used his writings and left out “balance” regarding opioids’ risks.

“I’ve come to conclude their conduct in marketing without context, without education, without risk, produced an increase in inappropriate and unsafe prescribing that contributed to the public health crisis,” he said.

Reporting by Nate Raymond in Boston; Editing by Bill Berkrot and Jonathan Oatis