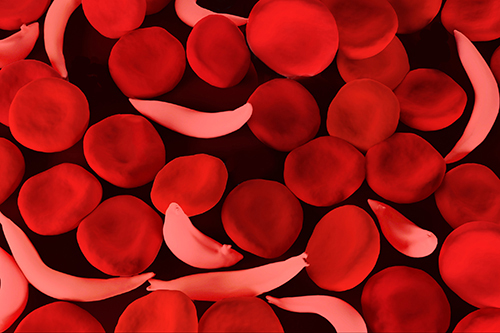 Sickle cell disease (SCD) is the most common genetic disease affecting 100,000 people in the U.S. According to the CDC 1 out of 365 African Americans and 1 out of 16,300 Hispanic- Americans have sickle cell disease. The majority of SCD patients are medicaid beneficiaries (less than 70% of doctors in the U.S. accept new medicaid beneficiaries). Below are current treatment options for sickle disease.

The U.S. Food and Drug Administration (FDA) approved a new medicine in 2019 to treat sickle cell disease in adults and children 12 years and older. The oral medicine prevents red blood cells from forming the sickle shape and binding together. This may decrease the destruction of some red blood cells, which in turn lowers the risk for anemia and improves blood flow to your organs.

Possible side effects include headache, diarrhea, abdominal pain, nausea, fatigue, and fever. Rarely, allergic reactions may occur, causing rashes, hives, or mild shortness of breath. Talk to your doctor about other medicines you take.

In 2019, the FDA also approved a new medicine to reduce the number of pain crises experienced by adults and children 16 years and older who have sickle cell disease. The medicine, which is given through an IV in the vein, helps prevent blood cells from sticking to blood vessel walls and causing blood flow blockage, inflammation, and pain crises.

Possible side effects include nausea, joint pain, back pain, and fever.

In children who have sickle cell disease, taking penicillin two times a day has been shown to reduce the chance of having a severe infection caused by the pneumococcus bacteria. Newborns need to take liquid penicillin. Older children can take tablets.

Many doctors will stop prescribing penicillin after a child has reached the age of 5. Some prefer to continue this antibiotic throughout life, particularly if a person has hemoglobin SS or hemoglobin Sβ0 thalassemia, since people who have sickle cell disease are still at risk. All people who have had surgical removal of the spleen, called a splenectomy, or a past infection with pneumococcus should keep taking penicillin throughout life.

You May Also Like::  Tislelizumab Plus Chemo Slows Advanced Squamous NSCLC

Hydroxyurea was later found to have several other benefits for people who have sickle cell disease, such as decreasing inflammation.

Hydroxyurea can cause the blood’s white cell count or platelet count to drop. Rarely, it can worsen anemia. These side effects usually go away quickly if a patient stops taking the medicine. When the patient restarts it, the doctor usually prescribes a lower dose.

You May Also Like::  Lorlatinib Superior to Crizotinib for ALK-Positive NSCLC

It is still unclear whether hydroxyurea can cause problems later in life in people who have sickle cell disease and take the medicine for many years. Studies so far suggest that it does not put people at a higher risk of cancer and does not affect growth in children, but further studies are needed.

Clinicians may recommend transfusion to treat and prevent certain sickle cell disease complications. These transfusions may include:

A blood and bone marrow transplant is currently the only cure for sickle cell disease, but it is not for everyone. Most patients who have sickle cell disease either are too old for a transplant or do not have a relative who is a good enough genetic match to be a donor. A well-matched donor is needed for a patient to have the best chance for a successful transplant.

You May Also Like::  Supreme Court Should Uphold Affordable Care Act: Biden Administration

Most sickle cell disease transplants are currently performed in children who have had complications such as strokes, acute chest crises, and recurring pain crises. These transplants usually use a matched donor. Blood and bone marrow transplants are riskier in adults.

Several medical centers are researching new sickle cell disease blood and bone marrow transplant techniques in children and adults who do not have a matched donor in the family or who are older than most recipients. Hopefully, more people who have sickle cell disease will be able to receive a transplant in the future using these new methods.

Blood and bone marrow transplants are successful in about 85 percent of cases involving children when the donor is related and HLA (human leukocyte antigen)-matched. Even with this high success rate, transplants still have risks. Complications can include severe infections, seizures, and other clinical problems. About 5 percent of people who have received such transplants have died. Sometimes transplanted cells attack the recipient’s organs. This is called graft-versus-host disease. Medicines are given to prevent many of the complications, but they still can happen.