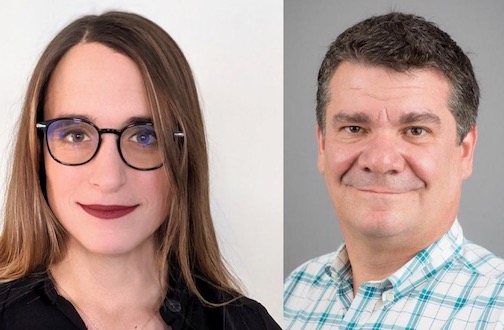 What disparities in LGBTQ+ health have you observed in your clinical practice?

“I think the disparities that I’ve seen the most of have been providers who are overly focused on the fact that someone is LGBTQ+ or they ignore it. Often, finding that middle ground of realizing that being LGBTQ+ is a part of who someone is but not all of who they are is important. And then, it’s similar health disparities you see in other underserved populations: being underinsured or uninsured, and having higher rates of smoking, displacement from housing, and mental health issues as a result of societal pressure, etc.

When I used to do LGBTQ+ 101 talks, I talked to my coworkers about how usually, when you have LGBTQ+ health disparities on a slide, you could substitute ‘LGBTQ+’ with almost any other marginalized group. It’s all the same symphony, just different instruments.”

“I would agree with that. In the trans community, specifically, a majority of states in the United States do not have protections for employment, housing, public accommodations, or adequate health insurance, and they do not have nondiscrimination protections in healthcare settings.

So, for example, say you’re a trans woman going in for your first appointment for primary care and hormones, and you perceive discrimination. Right? You say, I’m not going back there again, but you also still don’t have access to hormones. Right?

So you’re trying to pass in public, and maybe you have some facial hair. And maybe that physical trait leads to increased discrimination. Maybe there are no housing protections, so now you can’t get a home, or apartment, or a place to stay. Maybe you tried going to the DMV to get a license changed but didn’t have the ability to understand that information or the time to get your license changed.

So there are tons of hoops that are baked into a system that is inordinately designed by cis, straight, white men that places undue burdens on trans people and predominantly affects trans people of color and trans immigrants. Right? So we are then seeing those rates reflected in social determinants of health because we can’t access healthcare, which is a gateway for many trans people to simply exist.

So I would agree that trans people experience the same social determinants of health as many other marginalized populations, but then those disparities are exacerbated when your very existence requires for you not to be discriminated against in the healthcare setting.”

“We always hear about using the ER as your safety net when you get really sick. For trans people, the ER is often one of the least safe places for them. And so, they don’t even seek emergency care when they need it. And we’re seeing people who have not seen a provider for decades, not because they disappeared from medical care in their late teens and twenties but because they haven’t seen a provider at all. They do the best they can with non-medical transitions that put them at an even greater risk.

The other disparities we’re working on here at Transhealth Northampton are rural healthcare disparities that are stacked on top of the disparities that our patients are already facing. This comes as a huge surprise to many people, but trans people exist everywhere, not just in the cities.”

“Yes, and what we know is that if you are not counted, you will not count. Right? And we just don’t have a lot of demographic data being collected in rural settings on sexual orientation and gender identity (SOGI). So this point really underscores the need for comprehensive SOGI information to be collected across the country, using the same forms, so that the data can be systematized.”

“Well, bias is everywhere. Right? It’s baked into our perceptions. We, as humans, are very biased creatures. So the first thing anyone can do is be aware that bias exists. Then, educate yourself about the difference between unconscious and conscious bias. There are studies out there that will show that the awareness of unconscious bias in health systems actually increases bias for some people because they see unconscious bias as something that’s just inevitable.

So, what also matters is what we do with the information and education on bias. That means fostering empathy and understanding what the lived experience might be for someone else walking in their shoes. For example, in psychiatry, we have a hearing voices training where you can see what it’s like to experience psychosis. There’s an organization called Playground of Empathy, which offers trainings to help medical professionals foster empathy for those who are underserved.

You May Also Like::  Improving LGBTQ+ Clinical Trial Recruitment and Enrollment

We also need to be able to act and have conversations with our patients about the many things that they may need and be able to be in uncomfortable spaces where we might not like the answers or be able to do all that much. As providers, we are taught to treat and help and do all that we can. I think having empathy and being compassionate in these spaces means listening and being able to recognize what we can change and what we can’t change on behalf of our patients.”